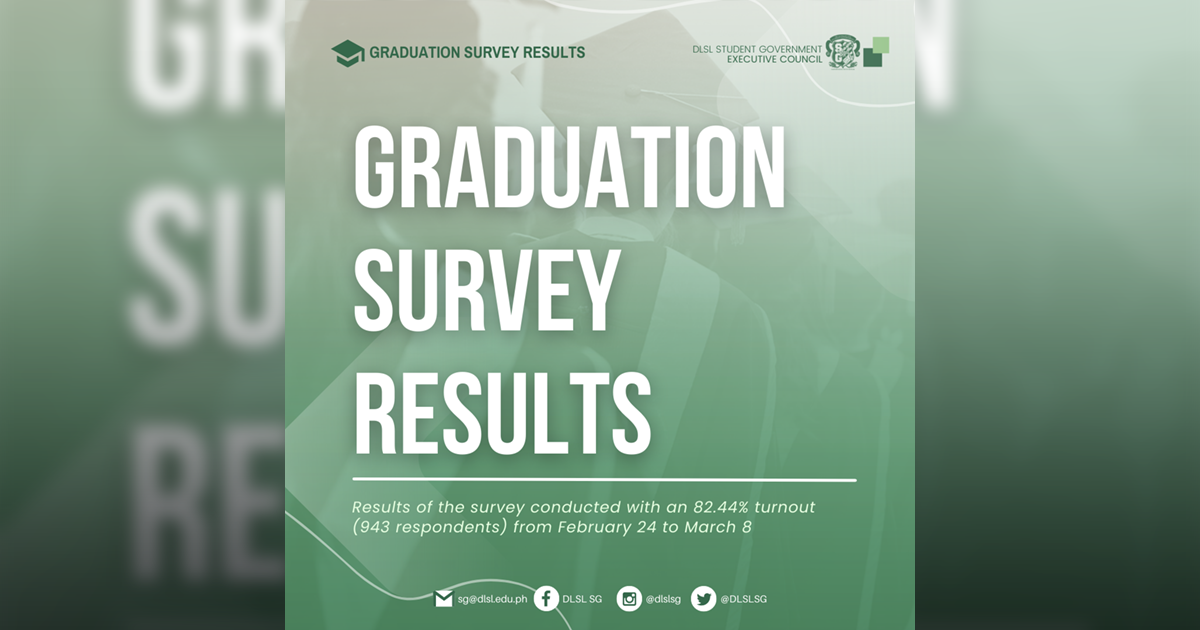 The graduation survey conducted by the De La Salle Lipa (DLSL) Student Government (SG) from Feb. 24 to March 8 revealed that 95.8% or 903 of the 943 graduating students who answered the form preferred a face-to-face ceremony for their commencement rites in August.

The survey garnered an 88.40% response turnout out of the 1,148 total graduating students.

Students and faculty were quick to support the survey results.

A graduating nursing student, Derecka Dimaandal, said that after all the “uncertainty” her batch has experienced, they “definitely deserve this precious once in a lifetime opportunity.”

A similar opinion was held by graduating electrical engineering student, Victor Audric Mendoza, who also pointed out the relaxed protocols for various mass gatherings in the country.

Aside from students who are in favor of marching in their graduation ceremony, parents like Mayette Cabato also shared the aspirations of the graduating batch.

“I think it will be good for them to have face-to-face graduation because they will have the chance to see each other for the last time and it’s every student’s dream to receive their diploma on stage,” Cabato said.

Moreover, the dean of the College of Education, Arts, and Sciences (CEAS), Ivee Guce, also favors the conduct of physical graduation as long as attendees will follow health guidelines.

“I understand how significant and momentous a graduation day can be not only for the students but for the parents as well. I fully support the idea provided that the health and safety protocols will still be observed,” said Guce.

Based on the survey results, the SG formulated a list of recommendations appropriate to the needs of the students.

The SG stressed that all graduation guests should practice health and safety protocols such as social distancing throughout the graduation ceremony’s implementation and process.

As per the survey results, 933 of the graduating students are fully vaccinated.

Should the face-to-face plans proceed, graduates will be allowed two companions at the DLSL Sentrum.

SG also proposed that hybrid graduation be conducted so other people can opt to attend online as well.

The SG also suggested dividing the graduating students into batches from Aug. 31 to Sept. 1 at different time slots to avoid a large crowd.

Plans for the graduation pictorials have also been suggested to be held inside the DLSL campus, while students who cannot travel to the campus can choose a photo studio near them.

Dale Fernan Castillo, SG executive president, stated that the DLSL administration has yet to respond to the released survey results and recommendations.

However, he ensured that they would ask the administration to include the SG in the graduation planning to ensure that the students’ requests are considered.

“We have set negotiable and non-negotiable matters in the council pertinent to the graduation ceremonies and we will stand by it as long as we are on the right conditions and motives grounded by our principles and objective protocols mandated by the authorities,” Castillo said.

“[The council] earnestly hope that the proposed hybrid graduation ceremony will serve as one of the institution’s first few steps in moving forward and in gradually transitioning to the new normal,” he added.

Despite their detailed proposals backed by survey results, SG clarified that in-person graduation would continuously be deliberated according to the current COVID-19 alert level in the province.

The province of Batangas has been under COVID-19 Alert Level 1 since March 16.

Meanwhile, DLSL has already conducted two consecutive virtual graduations since the pandemic plagued the country in 2020.