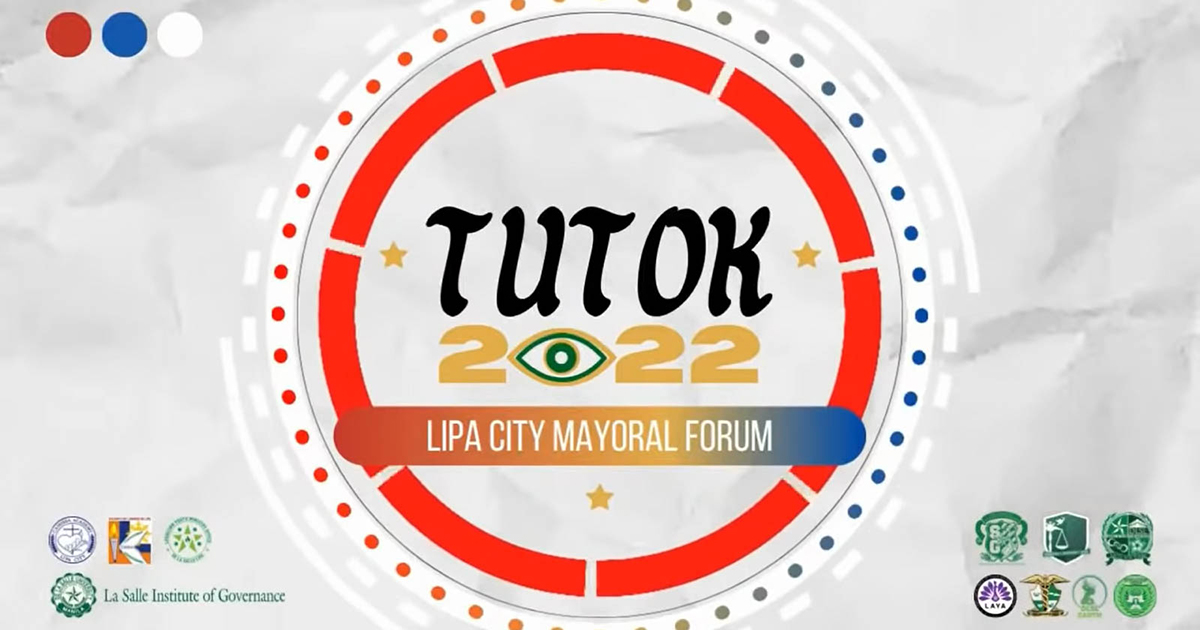 The candidates presented their educational backgrounds and political experiences through their opening remarks.

Sabili, meanwhile, emphasized the projects and reforms implemented during his term as Lipa City mayor.

In a survey released two weeks before the event, various issues in the city were identified, including traffic and transportation, environment, poverty, COVID-19 response, education, and unemployment, in which the two candidates shared their plans.

Sabili suggested creating and strengthening local laws regarding land development to address the issue of traffic jams and private/public vehicles. At the same time, Africa proposed to build more roads and pathways and ensure the proper implementation of local and national laws.

Africa also plans to strengthen zoning and proposed construction of townships in Lipa to mitigate rural industrialization and environmental issues. Sabili then emphasized the balance of environmental protection and urban modernization.

Furthermore, Africa assured the continuation of distribution of local government benefits and livelihood programs for the citizens of Lipa.

Sabili opposed this project. Instead, he promised to delegate a huge chunk of the local budget to teach Lipa citizens business, claiming it is more sustainable than handing out doll-outs.

When asked about COVID-19 response, both Sabili and Africa emphasized strengthening the healthcare systems of Lipa City by properly managing hospitals, contact tracing, and safety protocols.

Africa also promised to continue helping MSMEs (Micro, Small, and Medium Enterprises) by letting them borrow capital for their businesses. Sabili then reaffirmed his previous statement that he would implement training for MSME owners.

When the topic of quality of education came up, Sabili said that he would strengthen Kolehiyo ng Lungsod ng Lipa by adding more programs, including health-related courses, ensuring the competence of the professors, and providing sufficient school equipment.

On the other hand, Africa recalled his administration’s response when the Department of Education (DepEd) announced the prohibition of face-to-face classes. Lipa’s Local Government Unit (LGU) distributed 32,000 tablets for students, 2,600 laptops for teachers, and printing machines for modules for public school students and daycare centers in Lipa City.

He also proposed a plan to build a College of Medicine at Kolehiyo ng Lungsod ng Lipa.

On national and local issues

A yes-or-no segment entitled ‘Harapan: Stand on Issues’ emphasized the mayoral aspirants’ stand on political issues that aims to analyze their priorities and assess their knowledge of duties and responsibilities respective to the Local Government Code of 1991.

From the segment, Sabili agreed to the opening of face-to-face classes and the implementation of the Anti-Terror Law. Sabili also believes that there is a decline in the kapeng barako industry in Lipa.

Further, both candidates agreed to the Mandanas ruling, which addressed the inequalities in LGU funding. Both Sabili and Africa were also in favor of sex education at the secondary level and building relocation sites amid ongoing threats of the Taal volcanic eruption.

Both candidates also agreed to revise the Philippine constitution under a federalist government.

The final segment, entitled ‘Tutukan mo’, focused on the mayoral candidates’ aspirations for the locality once elected. Each candidate was tasked to choose a word to describe their visions for Lipeños.

Sabili, on the other hand, talked about providing ‘direct’ services to the people, including changes to healthcare and education.

Meanwhile, the only mayoral candidate who could not make it to the forum was Nestor Sanares of the Partido para sa Demokratikong Reporma due to a scheduling conflict after the forum was postponed from April 20 to April 29.

On the other hand, Tutok 2022 is an initiative that hopes to aid Lipeños in choosing their mayoral candidate for the upcoming local elections on May 9.

It was conducted under Project Balintataw, a youth-led movement and alliance of DLSL organizations such as Comelec, Student Government, Council of Student Organizations, Lasallian Alliance of Youth Advocates for Equality, Lasallian League of Nurses, DLSL Earth, and Educator’s Circle.