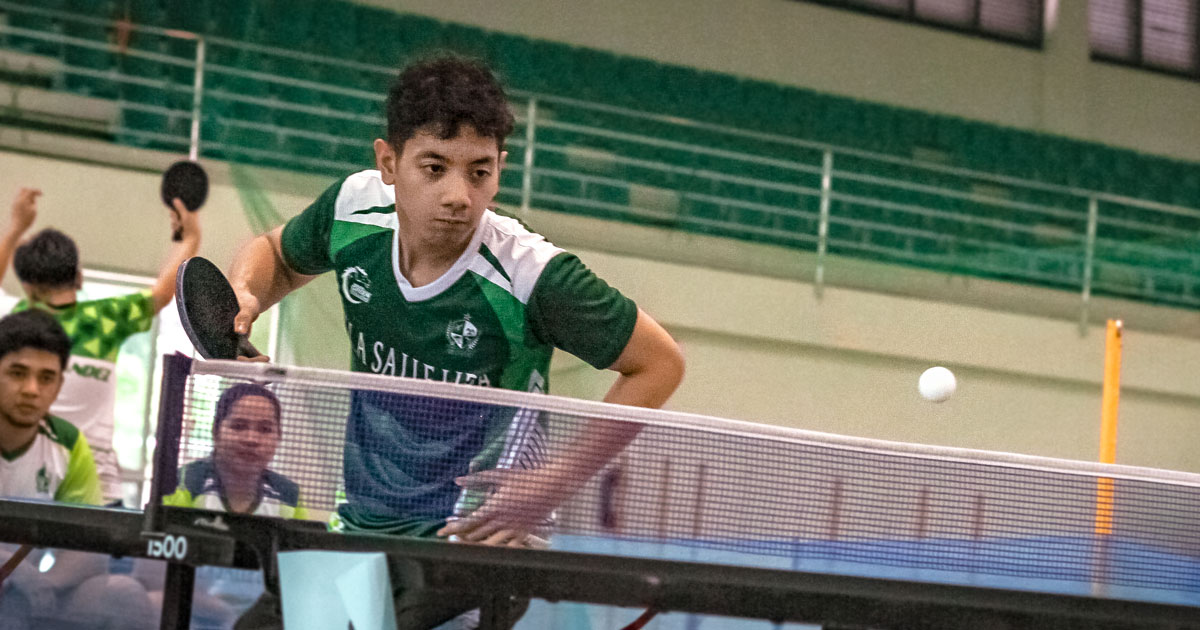 Another bag of gold for the squad in green.

The De La Salle Lipa (DLSL) Green Stallions owned the table tennis tourney once again in the 20th season of the Southern Luzon Colleges and Universities Athletic Association (SLCUAA) after smashing the Malayan Colleges of Laguna (MCL) Mages with five out of six match wins during the championship at the DLSL Sports Complex, Sept.28.

Service and reception errors turned out to be the weakness of the Mages in the different divisions, as the Lipa-based paddlers emerged yet again as victor, defending their undefeated title for the men’s category and the 2-peat success in the women’s category in this year’s championship.

It almost seemed an early upset for the Stallions in the men’s category as they failed to snatch the win in the singles A, through MCL’s John Merrill Acabado, throwing hard backhand spins towards DLSL’s Patryck Dvanne Dalisay , 0-2.

But with all eyes set to reclaim the supremacy on floor, Stallion’s Aeron Isles outplayed Mark Cabale from the Mages in the singles B to equalize the series, 2-0.

Meanwhile, multiple spins bashed by DLSL Men Stallion’s Ludwig Adan and John Lawrence Padre Juan ushered them to claim the upper hand against their opponents’ Raymund Perez and Einar Ocampo in a best of three-set matches in the doubles division, 2-0.

The green paddlers were hailed overall champs for the final rounds of the team events after notching two wins and one loss for the men’s category.

It was also a furious display of skill for the women’s category in all divisions.

On the other side of the court, Renalyn Busilig and Cherisz Baril from DLSL also tallied straight wins for  two sets marking their quick victory in the women’s category, singles A and B, respectively.

The Lady Stallions did not let their guard down as Christina Gwyneth Devilla and Jinky Jaro blocked MCL’s Sofia Espeleta and Paulene Laglagaron’s attacks with equally powerful strokes, 2-0.

In the end, the perfect 3-streak win placed the Lady Stallions on top of  the women’s category.

Following their win in SLCUAA, the DLSL Green Stallions will be preparing in the next three months for the upcoming National Collegiate Athletic Association (NCAA-South) this January.