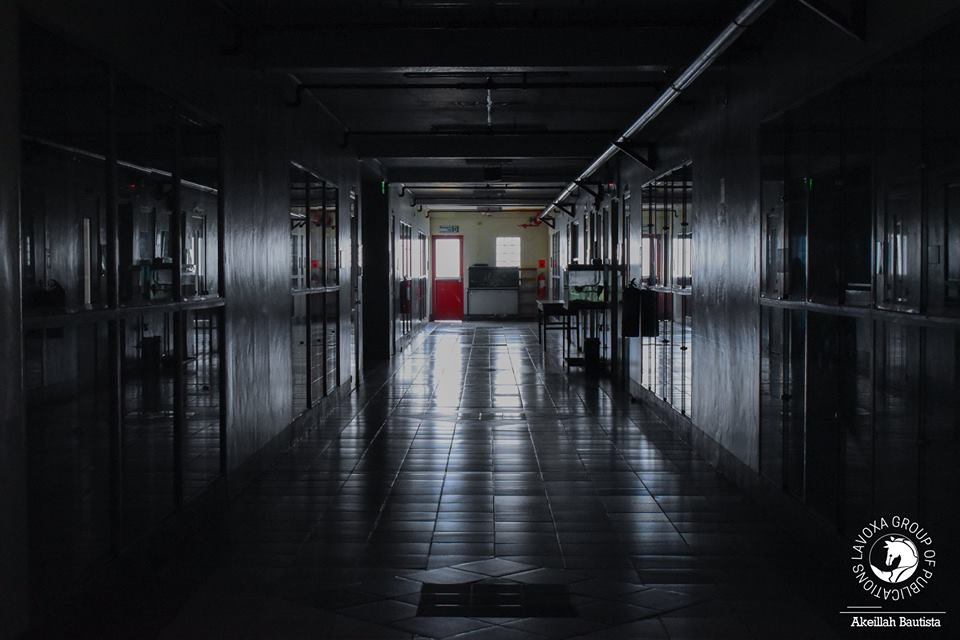 Established in 1962, De La Salle Lipa campus definitely has a lot of history attached to the walls, hallways, rooms and historic establishments that make up the campus. Before the institution became the digital and concrete jungle it is now, the land where the campus stands was once a vast field of coconut trees where certain activities of the Japanese soldiers were said to have taken place during World War II. Unfortunately, the horrors did not stop when the war ended as restless spirits in the area seem to still inhabit the place.

LAVOXA conducted series of interviews to consolidate personal experiences of different Lasallians. Grouping them based on the setting, here are eight of the supposedly “haunted” places in DLSL.

Disclaimer: The stories that follow are based solely on accounts of different Lasallians from Lavoxa’s interviews. Nonetheless, some stories may keep you from visiting several places in DLSL. Read at your own risk. 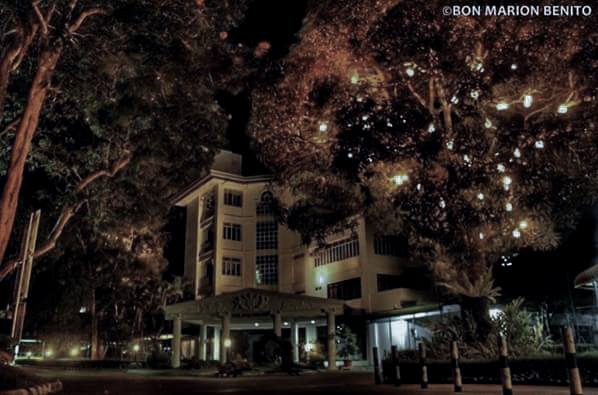 The Diokno building (formerly called MTDC) houses different groups of offices and facilities on its five floors. However, each floor also has its own share of spooky stories from employees, students, and other staff in the building.

A common character on the stories is a ghost of man, whom some described as dressed in black, in brown, or as a human-shaped shadow.

A professor who was also an alumni shared his experience with the said ghost during a class in one of the audio-visual rooms (AVR) on the third floor. He shared that in the middle of watching a presentation, one of her female classmates started crying. She confessed that there was a man, dressed completely in black, furiously looking at them with its bloody red eyes. They never used the said classroom again.

Meanwhile, on the male’s comfort room on the second floor, an employee shared that while using the urinal, a shadow in the shape of a human walked past him. However, he said he was sure that no one was with him that time. Others also report that toilets flush on their own, while cubicle doors open and close by themselves.

An even more chilling story was shared to have happened on the building’s top floor. A maintenance staff shared that one early morning on the old auditorium (before the renovation) he was setting up chairs for an event. Wary of the spirits told to be inhabiting the building, he played loud music on his phone to distract himself from his thoughts.

However, as if disturbing the said spirits, he saw a shadow walking in the corner of the room. Moments later, a chair fell over. He just shrugged it off and finished arranging the chairs, but later on, the chairs fell over one after another like dominoes.

But aside from the ghost of the said man, there are also reported sightings of a ghost of a child in the building. An employee from the Resource Sustainability and Generation Office (ReSGO) recalled how one time, when she arrived early for work, she saw a childlike figure walking slowly inside AVR 2. She doubted if it was a person as it was too early to be a student. 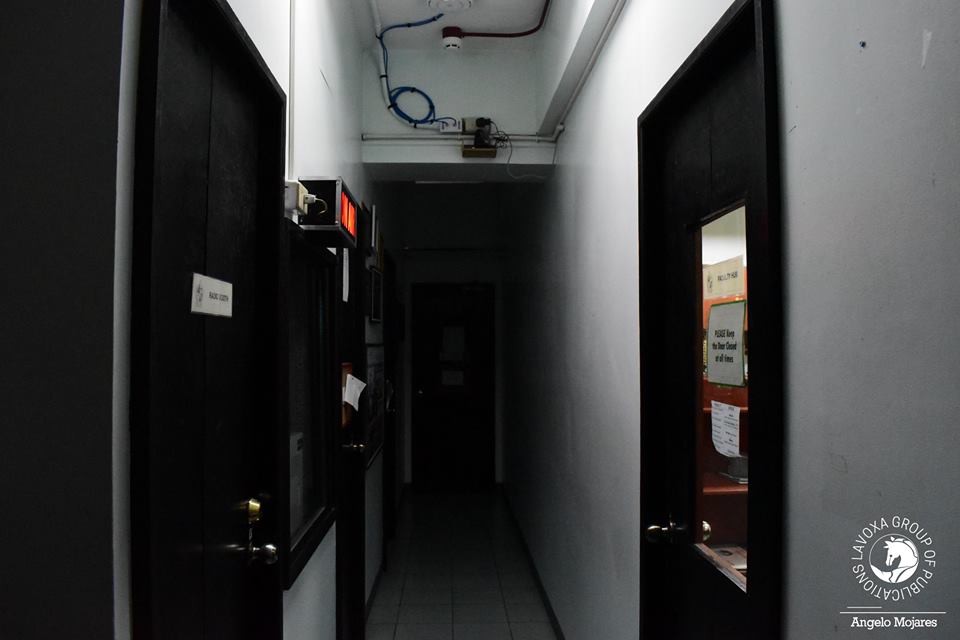 The Mabini Building (formerly known as Science Building) is one of the busiest buildings in the campus as it houses four of the six colleges in DLSL. Like the Diokno Building, there are horror stories reported on every floor of the said building.

Most of them involve spirits of children whom some believe roam the upper floors of the building.

One of them is most commonly felt in MB 408, the abode of AB Communication students. Plenty tell stories of “it” playing around in the radio booth, and sometimes, with the equipment in the room as well.

There were also several instances where security guards go to the said room after office hours because CCTV footages show that the lights are left switched on. However, dark rooms would always welcome them.

Meanwhile, some students also share about the spirit of a child in the old Student Government Conference room at the fifth floor, which is now MB 511. Officers of SG share that they often hear bouncing of balls, a child’s laughter and footsteps. The child was later named Chelsey. Rumor has it that Chelsey roams the fifth and sixth floor looking for playmates. 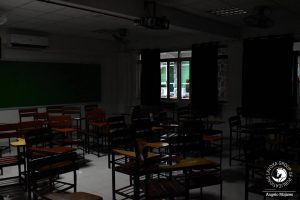 The Jose Rizal buildings (formerly Tertiary School Buildings) are one of the first facilities built for the college area. However, with the passage of time, the structure is now being solely used by the Senior High School students.

But back when it was still being used by college students, one chilling encounter happened in one of the rooms at the JRF building. It was December and a class was having an activity during their Religious Education class in the evenings. Suddenly, a student started crying and later on hesitantly said that there was a headless mad man standing at the back.

Afterwards, as if to prove what they heard, a strong gust of wind caused the curtains to billow. The weird thing was, a portion of the curtains remained still as if someone was in the way of the the curtain’s movement. The curtain wrapped around what looked like a figure of a man. It was the class’ last meeting in that place, as they requested for a change of room. 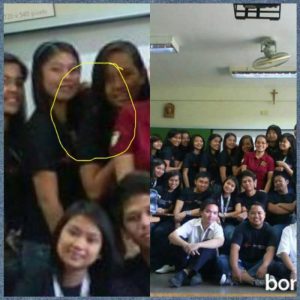 Another encounter in the JRF was that of a class who took a group photo after their last evening subject. Upon inspection of the photo, a figure was seen peeking at the back of the group, which resembled a human’s head. [see photo from Bon Marion Benito]. 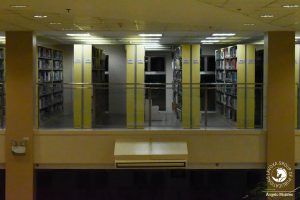 The College Learning Resource Center, although new, is not impalpable to ghost stories.

Another encounter was shared by a maintenance staff. Around 5:40 AM, as she was about to clean, she saw a kid run inside the library. She was baffled as it was still too early in the morning for a kid to be around.

According to her, she has a feeling that it was the same kid at the AVR 2 of the Diokno Building. Since classes are no longer held in the said room, it may have decided to go down to a busier area. 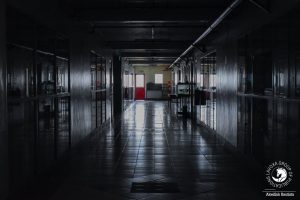 The St. La Salle building or, as others would refer to, the Hall of Lasallian Saints (located on the former 100-Wing’s location) houses the Junior High of DLSL, and some “others” that may be far too young.

Students from the IS are very much familiar with the preserved fetuses on display at the Science Laboratory located at the fourth floor of the building. Students, guards, and maintenance have their fair share of horrifying experiences with the fetuses. The most popular is the fetuses cries echoing the hallways at different parts of the day. The story became so persistent that the fetuses were buried instead only a few years ago.

Meanwhile, another student also shared her sighting of a faceless boy in shorts and a white sando standing in the fourth floor of the said building while she was going down the stairs. 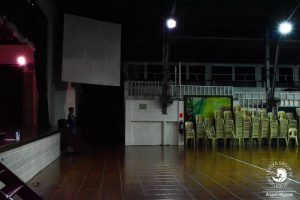 Directly connected to the HLS building is the Br. Henry Virgil Gymnasium, sometimes popularly known as the ‘Old Gym’. Upon entrance to the facility, one can instantly feel the history attached to the place. Rumors say that it was a place guarded by Japanese soldiers in WWII. According to some students, sometimes, they can hear them marching and chanting as well as the galloping of their horses.

Meanwhile, a more concrete experience was shared by a lady guard. One night in the late 1990s, she shared that while preparing for duty, she decided to take a shower in one of the restrooms near the sidegate. She took a shortcut and passed by the Old Gym. Suddenly, she heard the toilets successively flush on their own. 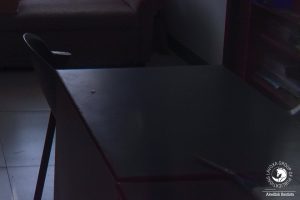 The Br. Miguel building (formerly 400/500-Wings) is the nearest IS building to the Animo Bookstore and Hacienda. With the looks of the building, one can say that the architecture of it remains untouched apart from the newly furnished classrooms.

One popular story that made the rounds in the campus was when a clerical assistant was on her way upstairs to bring some documents. Just as she was about to make her turn on the stairs, she was greeted by a headless Brother. Completely terrified of what she saw, the CA screamed and rushed downstairs.

Meanwhile, the Br. Benilde Building (formerly PLC Building) was renovated in the year 2013 and now serves as the main building for Grade School students. Most of the stories there also tell of a spirit of a child.

One early morning, an employee saw splats of blood on her filing cabinet. When she took a closer look at it, she noticed that there was child’s handprint on the side. What scared her was that the handprint was also in blood.

A few days later, the same incident happened again but the handprints were on her table and were stained with chalk-like powder instead. The employee swore that she was the last one in and out of her office that day.
As time passed by, she found out that before the building was renovated, there was a Balete tree standing right where her office was and that stories tell that the tree used to be inhabited by a child and woman. Now that the tree was cut down, it seems that the child took refuge in her office. 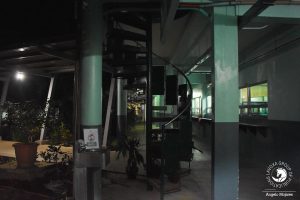 The Claro M. Recto building (formerly 800/900 wings) is the very first building erected for the college students and one of the oldest in the campus.

A story from the early 1990’s continues to stick around due to its thrill factor. It started with two female employees who stayed late at night to finish their work. They planned to work together in one of the offices in the second floor. They went to the said office separately, but each felt a separate set of footsteps accompanying them.

A mournful cry of a woman was also heard on the first floor when the two were on their way out. Faces ashen with fear, they resorted to praying and rushed through the spiral stairs.

These stories, whether true or not, serve as proof of the rich history our campus has. If there is anything to be picked up from these stories, it is to be mindful of our surroundings as we may be sharing them with unseen entities and forces. We should learn to respect them and not disturb them because, like us, who are alive, they too want some peace. 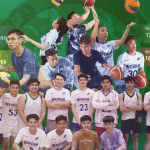