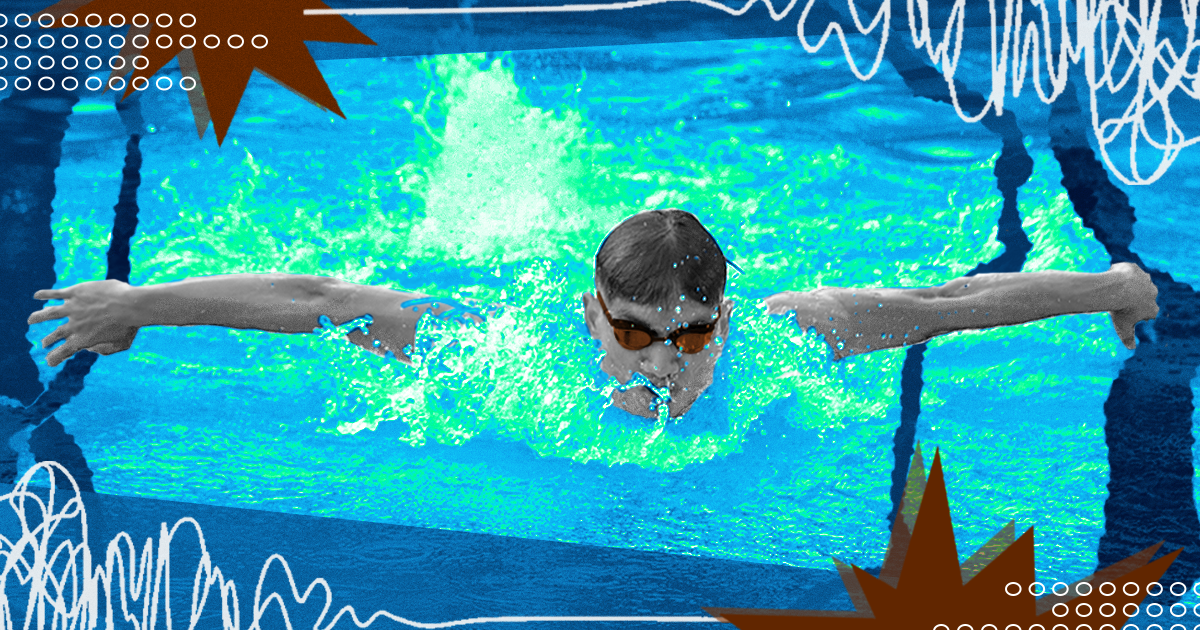 There will always be a few students whose targets differ from the usual college academic goals, in particular those who take pride in chasing after dreams that are usually a world apart from their college majors–the student-athletes.

Balancing academics with extra-curricular activities is not an easy juggling act, but Sam Emmanuel Palbacal, a third year student from the College of International Hospitality and Tourism Management (CIHTM), is taking on such a challenge.

Sam said that he was indeed lucky that through his family’s fondness in sports, he was able to find his niche in swimming.

He describes how his love for the water was something unexpected—as his previous sport of choice was volleyball—but the magic of swimming he said feels like flying as he glides across the water. However, what makes his penchant for his sport even more interesting is that he believes it has actually furthered his academics in terms of developing his character and discipline, contrary to what many would consider merely as a burden or distraction.

According to Palbacal, what separates student-athletes from regular students is being challenged to sacrifice the luxury of having as much free time to spend on leisurely activities. He shares that this requires them to be wise in choosing how to manage their time.

Adding to the mental and emotional strain are the physical demands of the sport. He revealed that there were many times in the past that he would break down psychologically and physically from the pain of heavy training. Despite these, he adds that being a student-athlete has built his character which he knows will help him in his future career as a chef.

He brought the same drive he has for swimming onto his grind inside the kitchen. In his 2nd year in the program, he was even chosen to represent the school in Manila Food and Beverage Exposition (MAFBEX) last June 17, 2019 where his team was hailed as champion.

College is difficult enough on its own and made even more difficult by having other responsibilities that divide his focus and interest. However, Palbacal was quick to shoot down the notion that being student-athlete limits him from acquiring higher academic achievements.

Palbacal shared that if one is passionate about what he does, the person can exhibit good results even in both academics and sports. He himself showed that it is possible to thrive in both fields, being hailed as a dean’s lister in his college and at the same time taking home medals from swimming tourneys such as the Philippines National Collegiate Athletic Association, managing to bag six gold medals from the 50m butterfly, 50m backstroke, 50m breaststroke, 50m freestyle, 100m breaststroke and 200m freestyle relay events last 2019.

As student-athletes, these select few have to prove their capabilities in school and are mandated by the sports office to meet grade requirements lest they be barred from competing. Knowing that the failure to comply in academics will prohibit him from pursuing his passion, Sam also pointed out that such strict policy has rather helped him to be more studious while retaining the lessons of time-management and character development sports has taught him. In turn he also said that his academics have also helped him to become a better athlete.

And now with half of his college-athlete journey done, he noted that becoming an athlete, even at least in his college years, will prepare him better as an individual to the real-world once he graduates, given the work ethic he has developed as a varsity throughout the years.

Although being a professional athlete is not his number one dream, he steadfastly believes that this dream is achievable in the Philippines because of the great potential of Filipino athletes. Through perseverance, he believes that our own athletes can be a force to be reckoned with and give foreign competitors a run for their money.

Amidst the additional challenges brought about by the pandemic, his way of life is put to another test. As a student-athlete, Palbacal sees the situation as the time to strengthen their discipline.

For him, as someone who cannot imagine his life without swimming, Covid-19 and the lack of sporting competitions will not stop him from continuing his sport.

Sam firmly believes that it all boils down to determination and passion and that obtaining a degree and flourishing in the sport that they love grants them joy despite the challenges that come along with it. But whether one is a student-athlete or not, young people must not waver in their belief that any pursuit worth taking may not be easy, but soon, it will be worth it.