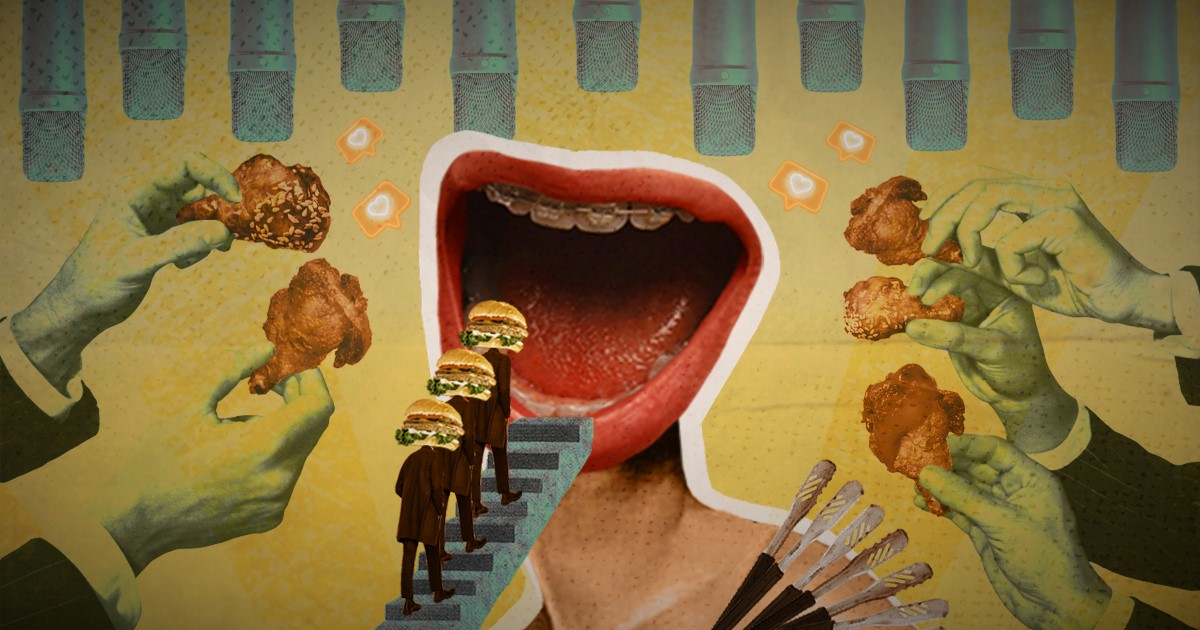 Over the past decade, people have been finding joy in watching food-crazed people consuming 10,000 calories worth of unhealthy food in one sitting—the image appealing enough to make their mouths water. Once the glazed chicken wings, hash-browns, and the cauldron of steaming noodles come into view, there is only one thought that lingers in their minds: I want to eat that!

Mukbang, which translates to ‘eating broadcast,’ started in South Korea to combat the cultural stigma against eating alone. People film themselves while eating to replicate the feeling of socializing while eating. Hence, mukbang content originally targeted people who can’t leave their house to eat with others.

However, when mukbang peaked worldwide, the once healthy form of entertainment transformed into a binge-viewing and binge-eating culture wherein millions of people enjoy watching other people consume massive quantities of processed or fast food.

Over time, YouTubers shoveling bowls of pasta or boxes of doughnuts into their mouths became normalized. Yet, people remain unaware of the damage it can do to those behind the cameras and those behind the screens.

“Surely, there was a good side to that—mukbang videos prevented my unhealthy path towards starvation. On the other hand, I was also given the wrong impression that it’s okay to overeat just because these enthusiastic-eaters on the screen don’t appear to have issues.”

During my teenage years, there was a time when starving was more of a trend than an issue of concern. I hopped on the mukbang bandwagon as a way to appease my hunger pangs, thinking that watching people eat the food I couldn’t have would be the same as satiating my cravings. It turns out it did the opposite.

I saw the happy faces and the bright eyes of these mukbangers as they ate, and I thought to myself: ‘why should I suffer from starvation when these people can clearly stuff themselves with so much food and still look healthy?’ Surely, there was a good side to that—mukbang videos prevented my unhealthy path towards starvation. On the other hand, I was also given the wrong impression that it’s okay to overeat just because these enthusiastic-eaters on the screen don’t appear to have issues.

With all their happy chewings and contented sighs, I only saw what they wanted their audience to see—the pleasure from eating delicious food. I failed to consider that mukbang channels are just like any other influencers’ channels; they all aim to encourage people to try what they do. As the number of eating self-tapes posted online progressively grows over the years, it appears that they have succeeded in convincing the mass that there is nothing wrong with devouring unhealthy foods that exceed the recommended portion sizes.

Many claimed that mukbangers are showing clear signs of disordered eating. Hence, the rise of speculations circulating on discussion forums online that mukbangers vomit their food right after filming or take laxatives because that’s the only way they can engorge in large quantities of food and stay in shape.

Regardless of whether those claims were true, it has been made clear that the message they are generating from their content can trigger people with eating disorders. The proof of this was shown in the study from Culture, Medicine and Psychiatry entitled “Mukbang and Disordered Eating: A Netnographic Analysis of Online Eating Broadcasts”, wherein it was found that mukbang appears to be a destructive force that may motivate restrictive eating or trigger a relapse into loss-of-control eating.

Individuals susceptible to those triggers could be suffering from bulimia nervosa, which the American Psychiatric Association defines as a condition characterized by eating large amounts of food beyond fullness in a short period and are typically followed by “compensatory behaviors” to prevent weight gains such as fasting, vomiting, laxative misuse, or compulsive exercise.

The first few times that I watched mukbang, I always had the urge to order food right away. It was difficult not to falter at the sight of delicious food. I let my appetite and the comfort of mukbang dictate what I will eat and how much I will consume. Shortly after overindulging, realization kicked in. I was tempted to force myself to throw up to compensate for my overconsumption and as a way to cope with the gnawing guilt that came afterwards. What I did was more than just cheat-meals, and after having enough of the internal struggle I was put through, I swore never to do it again.

“In my observation, the people who choose to film their feasts do not purposely do what they do to harm others. Perhaps, they just really love to eat and are often unaware of the effects of their content on those who watch them.”

In contrast to my experience, others expressed that mukbangs kill off their hunger. For some, when simple eating turns into full-blown no-chewing and almost-choking, that’s when they click off and divert their attention elsewhere. Having said that, I came across threads on social media with people discussing how they turn to mukbangs when they are fasting or dieting.

According to them, watching people “pig out” makes them sick to the stomach, and that’s how they lose their appetite. Though I think that it’s much better than being encouraged to binge, if utilized for this reason to the extreme, mukbang may also trigger another eating disorder: anorexia nervosa. Healthline defines it as the need to maintain extremely low weight by putting severe restrictions on their calorie intake, exercising excessively, and sometimes employing a binge and purge method similar to bulimics.

In my observation, the people who choose to film their feasts do not purposely do what they do to harm others. Perhaps, they just really love to eat and are often unaware of the effects of their content on those who watch them. Nonetheless, despite its negative facets, it’s not all that bad.

“For over a decade, mukbang has never been seen as an excuse for gluttony, nor has its ethics been questioned. It remains out in the open and free for anyone to view without so much as a trigger warning.”

After becoming aware of the negative effect mukbang has on me, I learned to prevent myself from partaking in disordered eating behaviors. Instead of letting it influence me like before, I focused on what I would feel after submitting to the temptation. It was no easy task, but I learned over time that in doing so, I am deciding what’s best for my physical and mental health.

It is easy not to see beyond the mouth-watering visuals of food. For over a decade, mukbang has never been seen as an excuse for gluttony, nor has its ethics been questioned. It remains out in the open and free for anyone to view without so much as a trigger warning.

At the end of the day, it is up to us to decide how it will affect us and which side of the double-edged sword to take.