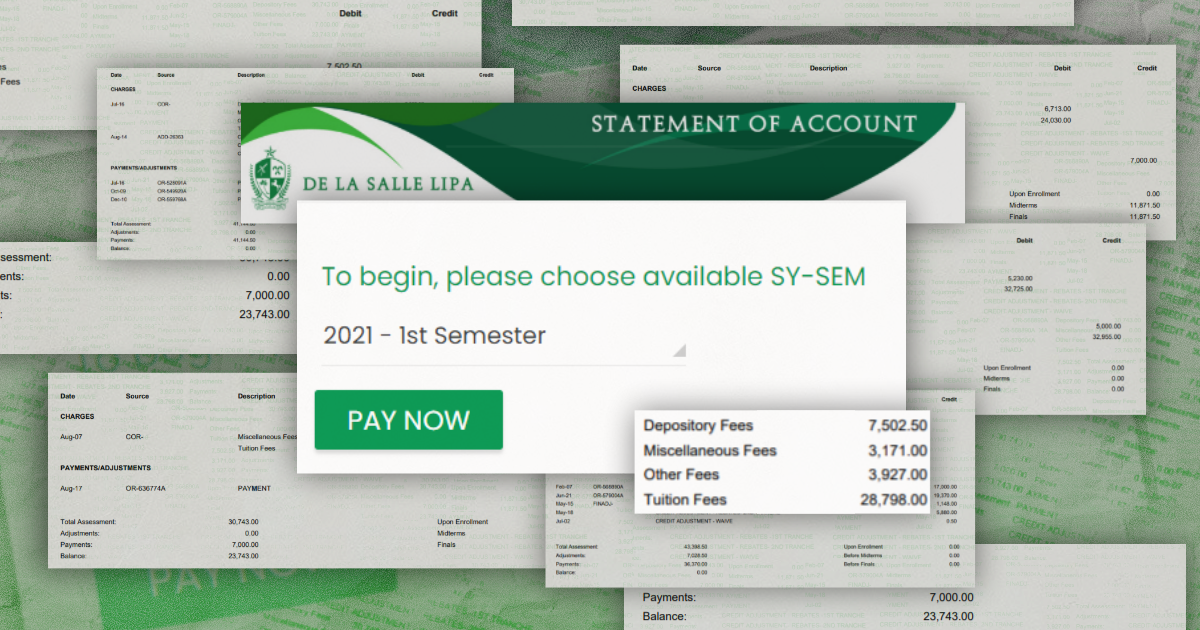 De La Salle Lipa (DLSL) once again experienced questioning amid the ambiguity of tuition and fees, which were the same issues raised in the previous academic year.

Following students’ and parents’ concerns on the still unreleased breakdown of the observed tuition and fees increase for the first semester of this academic year, the Student Government (SG) published a detailed timeline of the actions they have taken to request for transparency from the Finance Resource Department (FRD), through their Facebook page, Oct. 12.

“The DLSL Student Government aims to provide what is best for the student body and makes sure that they are given the service that they deserve,” the post wrote.

The timeline shows that the SG started communicating with the FRD about the tuition and fees hike before the enrollment period last July 29.

Furthermore, a meeting was set between the SG executive council and the FRD last Aug. 12, where an agreement was made that concerns about the changes in tuition and fees will be communicated through an official Canvas announcement.

A follow-up request regarding the announcement was sent by the council last Aug. 13 and Aug. 18.

The FRD then responded to the SG last Aug. 18 which stated that a breakdown of the fees has already been forwarded to the Strategic Communications Office (STRATCOM) and will be made available on the Canvas announcement page once the layout of the materials has been completed.

Another letter was forwarded to the FRD and the STRATCOM which requested for the release and the posting of the breakdown of fees last Aug. 31, and follow-up emails were again sent last Sept. 3 and Sept. 27.

As of press time, a detailed breakdown of the tuition and fees has yet to be released.

In hopes to address the existing plights of students and parents regarding the ambiguity of the changes in fees, Dale Fernan Castillo, SG Executive President noted that the executive council has tirelessly taken steps to call for a quicker release of the detailed breakdown.

“We made certain actions to augment the gaps, however, the lack of response [from the FRD] hinders us,” Castillo wrote to Lavoxa.

Students’ and parents’ concerns over changes in fees and breakdown

Prior to the posting of the SG’s official announcement, students have already noticed a hike in the miscellaneous fees and in the down payment for the installment payment scheme (Plan B) which showed a Php 2,000 increase, from the previous Php 5,000 to the now Php 7,000.

As there had been no advisories regarding the changes, students and parents including  Rebecca Publico, mother to a second-year biology student, grew more concerned.

In addition, issues on transparency were raised after the released assessment forms did not include a detailed breakdown of the components under the miscellaneous fees, which had also been a cause of concern in the previous academic year.

As situations continue to be dire during the health crisis, Sheena Sangalang, a third-year industrial engineering student, asked for compassion, “Some of us have parents who have lost jobs […] Pushing for tuition fee increases amid the situation is not a consideration.”

“Not every family was able to maintain their paying capacity […] I have one classmate who did not enroll this semester anymore, and it’s personally alarming to me,” Villena said.

In the second semester of last year’s academic year, the former members of the SG executive council were also in talks with the FRD after the latter proposed a tuition hike in their meeting last March.

In the proposal, it was noted that a 6 to 9% increase in tuition and fees may be applied depending on the program, following a 4.2% uptrend in the inflation rate of the country earlier this year.

To appeal for its cancellation, a collective position paper from the then college councils was released last March 17 which highlighted the grievances of students and parents concerning the financial and economic burden of the COVID-19 crisis.

“We simply cannot attain excellence in any aspect at the expense of the students’ welfare and financial capabilities […] let us think about our students in these trying times […] let us be the line that connects people with their aspirations and not the line that divides it,” the council wrote.

The FRD has not released any official response regarding the reconsideration of the proposal, but the current SG has already confirmed that there is an increase in tuition and fees for the first semester of this academic year.

After attempts to secure an interview with the FRD, Lavoxa has also yet to receive any response regarding the issue.