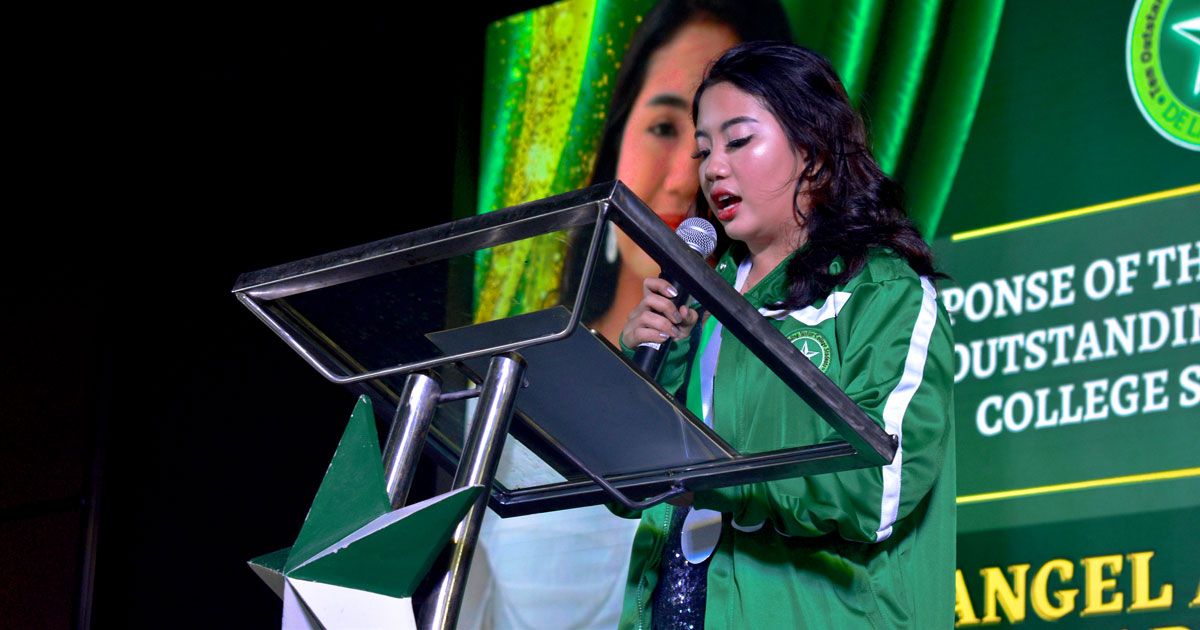 In her acceptance speech, De Jesus highlighted how the youth had become more innovative and creative in demanding change and standing up for what is right.

“Social media is indeed a powerful tool and as cliche as it may sound, this is true. For the past months, particularly during March, April, and May, I have seen how the youth used this tool to be the voice of society. The Filipino youth are determined, ambitious, and brave,” said De Jesus.

De Jesus also reminded her fellow TOJCS nominees, “As the inauguration will be held tomorrow, may we, student leaders and citizens of the Philippines, continue to say and stand with this statement: ‘Hindi pwede ang ‘pwede na’, because we deserve better.” She also encouraged them to continue their advocacies as they serve the people and the country.

Janine Alvarez, an electronics engineering student and president of the Institute of Electronics Engineers of the Philippines – Batangas Chapter (IECEP-BatSC), clinched the second top spot.

The third and fourth places were given to nursing students Clarabelle Bernice Garay, the vice-chairperson for Professional Organizations in Council of Student Organizations (CSO), and Joyce Nicola Villena, the Chairperson of Kilos Ko Youth for Fellowship Programs.

In fifth was Dionne Patrisha Calosa, a communication student and the executive president of the Association of Communication Students (ACtS).

Maria Seth Burias, the College of Nursing (CON) governor, was placed in the eighth spot. In the ninth spot was Simon Marquis Lumbera, an accounting information system student and the vice president for external affairs of JPIA.

Wrapping up the top ten was Maria-Francoise Therese Macatangay, a communication student and the radio guild head of ACtS.

Out of more than 100 nominees this year, 20 finalists were selected. The top 10 were chosen based on academic performance, community service, extracurricular activities, and interviews with the selection committee.

This year’s awarding ceremony was held at DLSL Sentrum after last year’s event was conducted online due to the pandemic. Some of the awardees of TOJCS from previous batch were also present and were recognized on stage.

TOJCS is an annual DLSL event led by the College of Students Activities Office (CSAO) to recognize students who embody the qualities of St. John Baptist De La Salle.