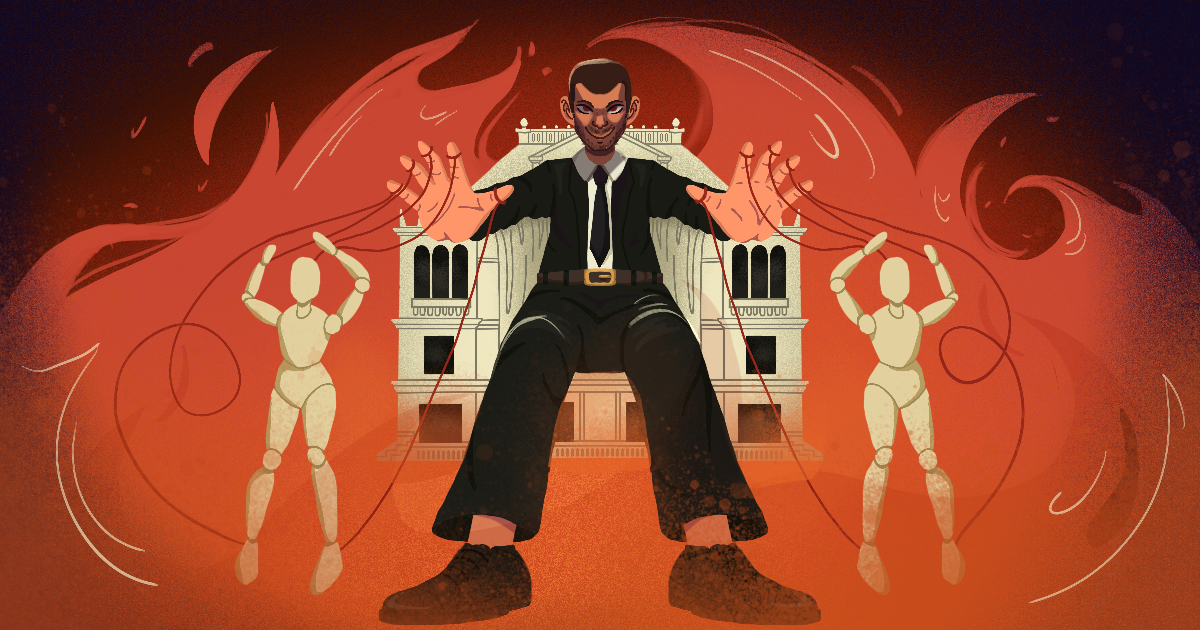 To be feared is better than to be loved, or so an edgy eighth-grader Machiavellian wannabe claimed. For starters, a Machiavellian is a type of ‘leader’ who would put himself above all else just for the sake of securing oneself in power. It sounded cool for an ignorant teenager like me back then. But it is drastically different now that someone is actually trying to portray such a character in real life, especially when that someone is at the highest public seat in the land.

Six months ago, at the controversial Sunshine Media Network International’s (SMNI) presidential interview, one of the panelists, Clarita Carlos, a political scientist who is now the appointed National Security Adviser, tried to introduce the idea of ‘better Machiavellian’, in what seemed like an attempt to pave the way and produce clout for the then electoral forerunner, Ferdinand “Bongbong” Marcos Jr.

Back then, instead of attending major electoral debates and interviews to fend off the issues linked to his name, Marcos took the convenient route of avoiding further denunciation, offering one excuse after another and even brushing them off as “unproductive” and that debates get “personal”. In fact, the SMNI “debate” was the only one he attended out of all other more official events organized by the Commision on Elections (Comelec) and mainstream media networks.

It has already been three months when Marcos Jr. (who in the SMNI interview acknowledged himself to be “Machiavellian”) officially took over the reins for Philippine presidency, but the measures he made to secure his place in the presidential palace were clear distortions of historical facts meant to mislead and divide the Filipino people.

Such a mindset sets the groundwork for a government with no accountability and legitimizes deceit as a practice towards political ends.

Prince, his worshipers, and fear

The concept of Machiavellianism is rooted in the principles of a 15th century Italian diplomat, Niccolo Machiavelli, who defined ‘effective governance’ in his book “The Prince” to include measures like doing everything necessary to achieve ends even through cruel and unvirtuous means like deceiving people, using them as tools, disposing them, and instilling fear to control them. Needless to say, the timeliness, reliability, and appropriateness of context for a 500-year-old book should be put in question immediately and should set off alarm bells for the possibilities it implies.

Doing anything to remain and prolong one’s power is the book’s number one rule, “the means justify the ends”. But do the means of covering lies and ridiculing the victims really justify the ends for hunger of power?

Fear grasps people by the throat, but that is the only thing it does. Fear forces people to do what they were asked and shut their ability to think for themselves, let alone about other people around them.

Going back to my eighth grade, it was during a lunch-break discussion when a classmate asked if we preferred our intimidating teacher over a free-spirited one. A big chunk of the group agreed as they felt they were more obligated to learn under them because they were afraid they would be reprimanded or punished otherwise, and I, as a then go-with-the-flow teenager, went along with it. Did I pass that teacher’s tests? Yes, probably. But did I grow as a person? Definitely not.

The only thing I learned back then was fearing the idea of punishment. I only did what I had to do, but I was never granted the luxury of exploring my intellect more deeply. I could even say I delivered but not succeeded as their student.

Fear grasps people by the throat, but that is the only thing it does. Fear forces people to do what they were asked and shut their ability to think for themselves, let alone about other people around them.

Fear is one of the weapons that Machiavellians use to intimidate and control their people. This was demonstrated perfectly by the current Vice President and former Davao City Mayor Sara Duterte when in 2011, she punched a court sheriff three times when the latter was just following a court order of house demolitions in Barangay Soliman, Agdao district, Davao. Some may say she was just concerned about the people living in the area, while it is clear for others that it may have been a warning to people who would dare oppose her–a mirroring trait she got from her father, the former iron-handed president who was also notorious for using unparalleled unnecessary threats.

Unlike his father and his predecessor, Marcos Jr. does not really strike fear outrightly. Although perhaps we have yet to see how Marcos Jr. demonstrates his way of using fear. It could also even be argued that he may not find it necessary for now to do so as his mere appointment as the new president already resurfaces the fears his father instilled during the implementation of Martial Law back in 1972.

His supporters always argue that people should not judge someone based on their parents’ history, which may have a partial point, but the thing is he himself never really acknowledged the acts surrounding history.

Time and time again, he has used his version of the story as a leverage to charm both those who have already been fooled or are privileged enough to romanticize the concept of ‘iron grip’ while passively playing victim to gather sympathy from people who are too closed-minded to try and know better.

He has consistently denied the human rights violations of his father during Martial Law even though according to Human Rights Violation Victims’ Memorial, 2,326 were killed or disappeared, 1,922 were tortured, 182 were degraded, 3,355 were detained, and 3,318 were exiled from 1972 to 1986.

When he was interviewed by CNN last year, he repudiated his father’s wrongdoings, on the excuse that ‘he can only apologize for what he [himself] has done’, and implied that he had nothing to do with it even though his father’s atrocities may have played a big role on his current political status.

Months later, he was also interviewed by Boy Abunda regarding his insight about Amnesty International’s statistics of human rights violations during Martial Law in which he had the impudence to question the credibility of the said non-governmental organization, completely missing the point of the question.

In fact, Marcos Jr. even pushed for revisions of history books two years ago claiming that the peer-reviewed and scholarly studied texts used in schools are full of lies, and implying that his words are more credible than those of the historians’. He even ridiculously claimed that the textbooks were part of a prolonged ‘political propaganda’ to teach children lies about their family.

Or when the facts seem insurmountable, he would try to whitewash his father’s inhumane regime like what he did in an episode of Toni Gonzaga’s YouTube show called ‘Toni Talks’.

Time and time again, he has used his version of the story as a leverage to charm both those who have already been fooled or are privileged enough to romanticize the concept of ‘iron grip’ while passively playing victim to gather sympathy from people who are too closed-minded to try and know better.

Nor did he ever acknowledge the benefit from the wealth and luxury he grew up in at the expense of the people of this country. This not only screams privilege but also lack of accountability, certainly not the quality people should seek from their leader.

This begs the question: if a leader cannot even be honest to his own people before he sleeps on the palace’s bed, how can people be so sure that he would realize his promises during his term? If a ‘leader’ does not have the guts to take accountability for the past, then he would never take accountability for his mistakes in the present, let alone his potential blunders in the future.

Machiavellianism has been overly romanticized and saturated over time to the point that people place a positive connotation to such a self-centered ideology when in fact it is a mere handbook for the would-be narcissistic tyrant.

The point of the SMNI event was simply to try and portray Marcos as this one-of-a-kind “good Machiavellian” despite the word ‘Machiavellianism’ itself being literally associated with deception, distrust, and manipulation.

The main problem that stinks from the skin of the said national ‘leader’ is his Machiavellianistic nature itself–to do everything at his power and at anyone’s expense just to keep his beloved authority to himself.

The People Power Revolution is not a commemoration of any political color or faction as to what denialists and the self-proclaimed Machiavellian want you to think, but a synchronized stance against a dictatorship of an undeserving human-rights-violator-for-a-president–a simple fact that the Marcos Jr. could not accept.

A leader who is close-minded to facts and wants to do what he wants in spite of stepping on his people’s griefs and professions should not be called a leader at all, but a mere dictator-in-training.