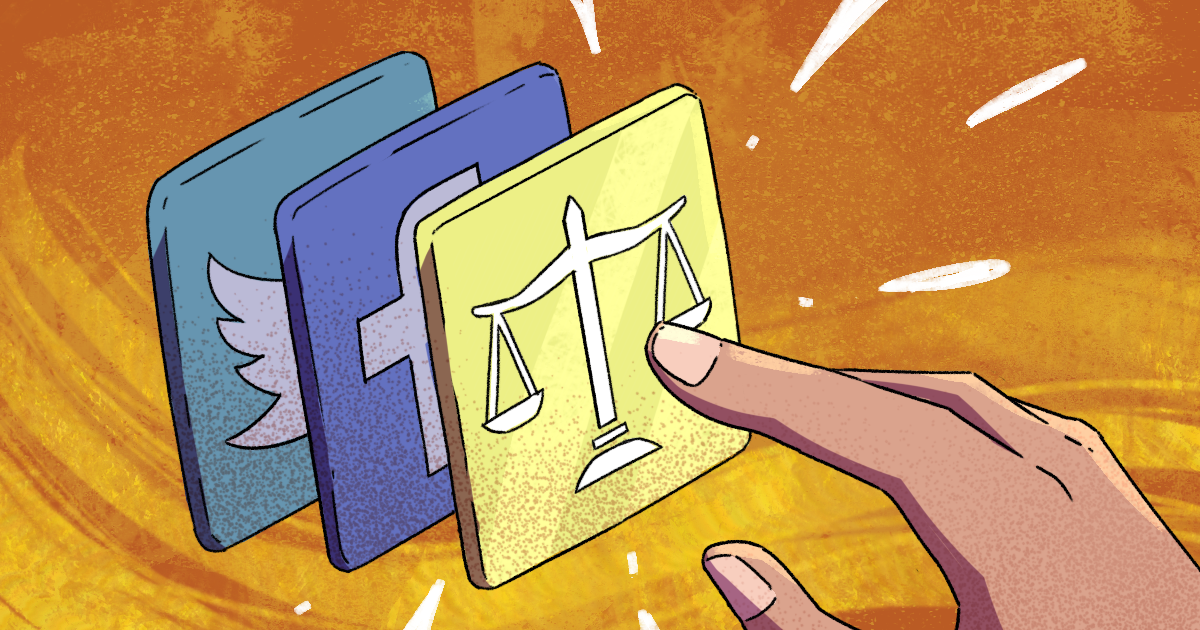 Over the years of technological advancement, the way we transmit and receive information has shifted from watching television and reading newspapers to browsing various applications on our mobile phones. These phones, which are within reach of one’s fingertips, have given us almost immediate access to media at any time and place. With the plurality of platforms emerging, our media usage has to be guided by laws and ethics. This is the reason why Media Laws and Ethics is an available course, for mostly communication students, where they tackle legislations and etiquette governing the media activities in the Philippines.

Little do we know that invisible algorithms have been controlling the present media landscape to tailor the content that reaches the audience. In turn, the responsibility of maintaining coherence over the platforms has been passed on to the users themselves.

This is why contrary to the academic presumption that only journalists and media workers should be knowledgeable in this field, everyone must have a background of these legal and ethical boundaries by studying Media Laws and Ethics as a general course.

On upholding freedom of speech

Through Media Laws and Ethics, people could appreciate freedom of speech as a basic human right and be conscious of our limitations towards it. This course will walk us through Article III, Section 4 of the 1987 Constitution, where the right to freedom of speech and expression is engraved.

“Little do we know that invisible algorithms have been controlling the present media landscape to tailor the content that reaches the audience. In turn, the responsibility of maintaining coherence over the platforms has been passed on to the users themselves.”

Being citizens of a democratic country, we are entitled to express our own thoughts and exchange ideas with one another without fear. Some people are not aware that the act of posting or commenting on social media is not a privilege but a right. There is no such requirement for us to obtain this right nor can it be taken away from us. In fact, we have come into an era where all of us are capable of becoming both producers and consumers of content. We can initiate conversations in the most convenient and quickest way possible, but we do not fully realize yet the power our arguments hold.

Despite the role of communication in our daily lives, freedom of speech and expression is still barely appreciated or worse, oppressed. Just as when today’s youth are slowly learning how to take up spaces and amplify their voices, the society would still live up to its long-established impression that young people know nothing.

Earlier this year, I, together with my youth co-volunteers, had an encounter with a man, perhaps in his early forties, who seemed to claim that he knew everything. At every piece of truth that we would utter regarding our country’s past and even present situation, he would just dismiss it and laugh at us. He even said that he pitied us because we were brainwashed at a young age.

During that time, I realized that maybe the reason why some people are afraid to engage in conversations is because of people like him. Some people would rather stay silent than to be invalidated. I admit that I used to be one of them, until I thought that if others are confident in spitting lies, why would I be submissive if I knew better?

When I learned that it is my right to voice out my sentiments, I became more assertive in sharing my views and interests on social media and even in conversing with others personally. Not to mention, as I was writing this opinion piece, I was reminded that my right to freedom of speech and expression is guaranteed and I need not to be afraid of being censored.

Seeing how Media Laws and Ethics reinforces a deeper understanding of our right to freedom of speech and expression, people can be empowered to participate in discourses that affect the society. At the same time, Media Laws and Ethics could urge us to actively exercise this right, so we can draw attention to matters that need urgent response, alongside taking a stand that will benefit the majority.

One of the most pressing issues today is the schools’ lack of safe spaces for the members of the Lesbian, Gay, Bisexual, Transgender, Queer, Intersex, Asexual, and more (LGBTQIA+) community. There are still institutions that remain oblivious to this issue and would not let these people dress as to what gender or identity they associate themselves with.

For instance, a communication graduate of De La Salle Lipa (DLSL), on behalf of her fellow transgender and non-conforming individuals, reached out to the Student Discipline Formation Office (SDFO) to let them appear in their graduation picture and ceremony in a way that they are comfortable with. As far as DLSL’s policies are concerned, the institution was inattentive not until this request was brought up.

Few negotiations after, her petition was denied but compromises were made. DLSL allowed the transgender and non-conforming graduates to keep their hair length as long as it was tied and to dress according to their identity and expression through gender-neutral attire and closed shoes.

This goes to show how the courage to speak up can change the existing systems that deprive others of their liberty to express themselves. Media Laws and Ethics could strengthen our power over our freedom of speech and expression, enabling us to assertively extract criticisms in our current sociopolitical environment.  In fact, our society would not change if issues would not be talked about. Grievances would remain unresolved if no one would be brave enough to voice them out.

As this right to freedom of speech and expression enables us to produce almost all forms of media content, a lot of people are still unmindful of the proper consumption of such information. Having access to different contents is far from having ownership over them. Although writers or artists publish their works, it is illegal to claim them as ours just by modifying them for academic or personal use. Media Laws and Ethics can remind people to be accountable in consuming information by emphasizing that stealing one’s ideas is punishable under the copyright law.

Considering that almost everything is accessible through the Internet nowadays, some people have adapted the ‘copy-paste’ habit, unaware that this is considered as an act of plagiarism. There are also a lot who normalize it despite knowing that they are plagiarizing other’s work. In line with this, Media Laws and Ethics could also acquaint us with how we can avoid plagiarism such as through giving due credit to sources, paraphrasing texts, and quoting references.

However, one thing I have learned from the research courses I had in high school is that plagiarism is never unintentional. We are indeed aware when we are infringing someone else’s work but for the sake of complying with the academic requirements, some do not bother at all. With this observation, I can say that the issue regarding plagiarism is just passively taught in schools through instructing the students to cite the references and checking whether the work is plagiarized or not.

“Despite the role of communication in our daily lives, freedom of speech and expression is still barely appreciated or worse, oppressed. Just as when today’s youth are slowly learning how to take up spaces and amplify their voices, the society would still live up to its long-established impression that young people know nothing.”

Apart from that, I have noticed that being mindful of using information has become more of an act of self-regulation. I remembered myself being cautious when writing papers. I would always make sure that I have restated the texts in my own words if necessary and check if I have cited all my sources accordingly. But then, not everyone has the initiative to do so. Hence, incorporating Media Laws and Ethics in the general curriculum could urge people to dig deeper into the significance of recognizing plagiarism as both illegal and unethical.

However, there is always an exception to the rule. Media Laws and Ethics will remind people that while everyone has the right to speak and be heard, this freedom is never absolute. As much as it is upheld by the state, freedom of speech is also subject to legal restrictions coupled with moral responsibility, particularly if we go beyond the extent we can exercise this right. Our freedom stops when it violates another person’s rights. Such acts that are punishable under the law include libel or the disclosure of false information that may affect a person’s image and cyberbullying or the use of electronic channels to induce harm or threat to others.

In this current landscape where not everyone has the courage to exercise their freedom of speech and expression to its full extent, the future of our society is at stake. Thus, a better way of creating an engaged and well-informed community of media producers and consumers is to acquaint people with the rights and limitations linked with the freedom of speech and expression through Media Laws and Ethics.