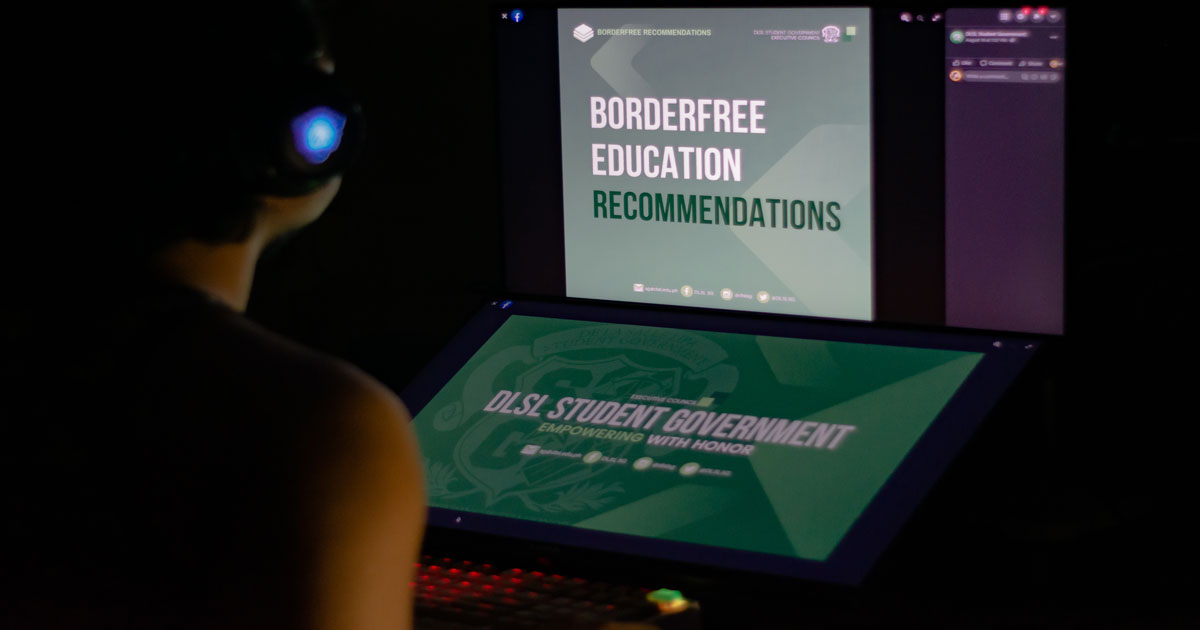 To call for improvements in the online learning experience of Lasallian students, the Student Government (SG) released an eleven-section Borderfree Education list of recommendations, which highlighted the revisions of guidelines and protocols for the current and upcoming semesters, posted on their Facebook page, Aug. 18.

SG Executive President Dale Castillo said they formulated their initial recommendations based solely on last academic year’s Borderfree Education set up, not knowing that the school will implement certain revisions this academic year.

Castillo added that they were also given a chance to present the said recommendations and raise them to all the College Deans and members of the Office of the Vice-Chancellor for Academics (OVCA).

De La Salle Lipa’s (DLSL) Vice Chancellor for Academics (VCA), Iezyl Torino, responded that the OVCA was very much open to the recommendations drafted by the SG and clarified that some of the recommendations were already in effect since their office had previously discussed it.

“Buti na lang nagkaroon kami [OVCA] ng sort of discussions prior to that [SG recommendations], at least ‘yung iba nare-resolve na namin along that line. Kasi kung halimbawa, it is the first time that I’ve heard of that [proposals] noong August 18 [SG posted the recommendations], it might be too late for us to somehow revisit pertinent guidelines,” Torino said.

As per the SG proposal, mental health break shall be imposed on the fifth week of the first semester and the 14th week of the second semester to give students and instructors time off from academics.

During the mental health break, instructors will give no such deadlines even a week after its implementation but ensure that all the modules are still accessible for the students.

SG also reiterated in the recommendation that the Students Under Special Circumstances (SUSC) or the option that allows students to apply for an extension of the semester shall still be made available for everyone despite having breaks.

Moreover, the OVCA has responded to this recommendation by scheduling the said break in this year’s academic calendar on Nov. 1-5 and May 9-13 for the first and second semester, respectively, as per the latest update of SG in their Facebook page last Sept. 3

On the other hand, Torino highly encouraged the use of personal lectures in modules and reiterated that teachers were advised to minimize the use of YouTube Videos unless it is for additional references.

She also instructed the faculty members to make efforts in educating themselves regarding technological advancements to be able to provide other learning resources for the students, especially with the current learning setup.

“For this year [we’ll] try to somehow engage our faculty [and] capacitate them [on] how to make more interesting and engaging material as well,” Torino said.

On the early posting or uploading of modules

As for the early posting of modules, Castillo shared that OVCA has set guidelines that state instructors should upload all modules ahead of time for students to plan out their assessments and learn at their own pace. 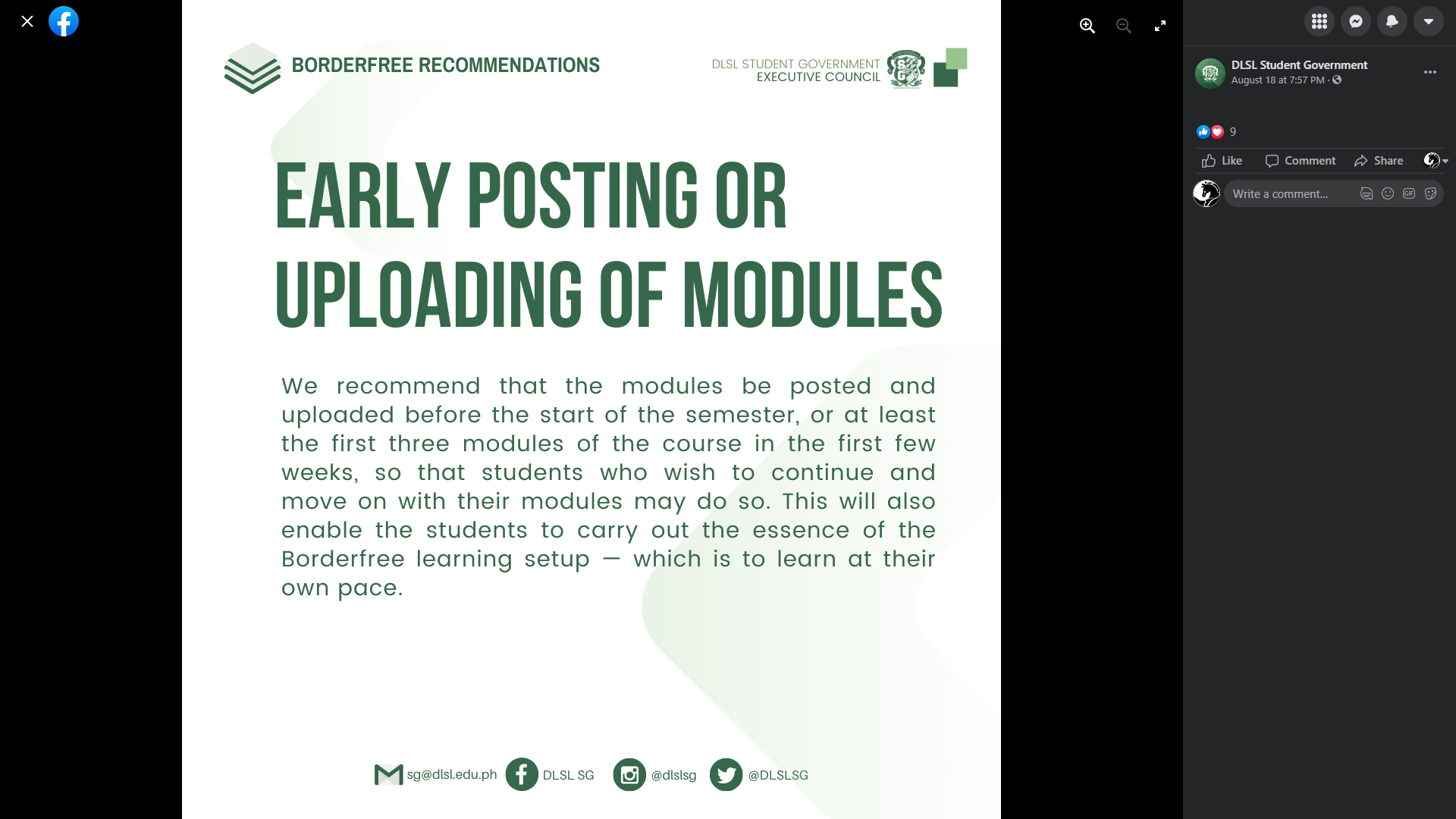 However, Torino mentioned that for new academic courses, which most are offered to fourth-year students, they advised instructors not to publish all modules and assessments yet since the content must go through a quality assurance check first to deliver the educational materials better.

Another concern Torino pointed out on the modules’ late uploads is that most of the new master courses are being taught by part-time instructors who still need to undergo the orientation process and PDCommons, a Canvas training course for both teachers and students.

“Number of these course offerings are to be taught by part-time faculty […] because of specialization. Medyo nahihirapan kami sa pag-prompt sa kanila to attend orientations and for them to also do the Canvas courses [which] they should be a step ahead from the students [..] dapat ‘yung learning management system gamay na gamay na,” said Torino.

Meanwhile, third-year multimedia arts student Marielle Torino said that having modules uploaded early will aid in managing time properly and will allow students to skim through different topics as early as possible.

“Based [on] the following recommendations presented by the Student Government, early posting or uploading of modules would personally be my preference. As a student with different responsibilities, it is necessary for me to come up with a timetable so that I could already have an idea [on] where to plot my schedule,” Torino said.

On the uniformity of guidelines and student handbook

SG also tackled the uniformity of policies concerning important matters for all college departments, such as proposed due dates and deductions, lock dates, and uploaded materials.

Castillo said that OVCA already mandated the preexisting policies under the uniformity in guidelines recommendation to all professors; however, there were some misunderstandings that they are currently handling.

“They said that they will take a stricter implementation on this, but we,  the SG, will take some steps to address this as well,” Castillo said.

Castillo then reiterated the steps SG would take to ensure that the recommendations would be properly followed by both the students and professors.

“[The] first action that we are currently doing is drafting consolidated instructions debunking the misconceptions on the negotiations between the professors and the students. After this, we will be asking class representatives to monitor and raise it to us to address those concerns [by] relaying it to our academics committee,” said Castillo.

On the other hand, Torino mentioned that the proposed due dates and deductions and realistic time frames will always be negotiated between students and teachers.

As for the student handbook, Torino shared that similar to last year, only addendums in the old handbook will be released and used for this academic year, and their office is still waiting for the provisions.

Meanwhile, when asked when these proposals will take effect, Torino and Castillo emphasized that the school already implemented some of the recommendations in the first semester of this academic year, while other suggestions are still under deliberation.

SG also calls for students to express additional comments, suggestions, and recommendations through a link provided on their official Facebook page.